How does a comedy stage hypnosis show work?

How does a comedy stage hypnosis show work? 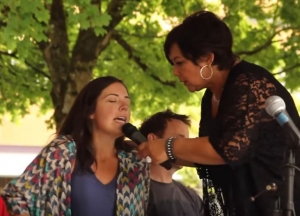 A lot of people ask, how does a comedy stage hypnosis show works, and the first thing is to begin with the guests and audience. People come to a show hoping to have fun and to set aside stress from the busy world at school or work or in a community by setting out to have some fun! People do this all the time, sometimes by going to a movie, sometimes a concert, sometimes just dinner with friends can be a great way to escape, and many other activities from Karaoke night to a weekend festival.

But there is something different about a comedy stage hypnosis show, and that is, the audience members get the opportunity to be the stars of the show! Some people, who know what to expect at a comedy stage hypnosis show plan to volunteer to be on stage and try to be hypnotized. For others, the idea is new, and when Mariana Matthews starts doing some demonstrations of hypnotic phenomena, it piques their interest end they want to participate by being on stage. For a few others, they really are ambivalent about going on stage, but their friends have encouraged them to be the volunteer because they know their personality will succeed in comedy stage hypnosis.

People sometimes wonder, “What happens if nobody goes up to be hypnotized?” Well, it just doesn’t happen. In any group there are usually more people who want to volunteer than there is space on stage. Hypnosis is fun, it feels great and teaches a valuable life skill. I have never performed a show, or seen a show, where people didn’t jump at the chance to be onstage, and this includes corporate events, colleges and schools, festivals, and just about every age group.

Because a comedy stage hypnosis show is an interactive show, the audience and the members on stage then interact, with the audience encouraging interesting responses while those on stage are in hypnosis; and those onstage are teasing back at the audience, requiring higher levels of energy from the audience for them to “take the show further!”

The result is that everyone in the theater, from the stage to the members of the audience (even in the back row) becomes part of the action.

Sometimes people ask me, “But they did crazy things onstage?! Did they know what they were doing?!” The answer is: Of course they did! Probably the best explanation for this is karaoke night. Sure people do some silly things (but never humiliating or embarrassing, and certainly nothing x-rated in a show with Mariana) but they did those silly things to have fun. A lot of really bad singers go up every night at karaoke night, but even though they can’t carry a tune with a large bucket, they let loose and have fun. This is the same reason people follow through on hypnotic skits that demonstrate the power of hypnotic phenomena.